From Wikipedia, the free encyclopedia

The Jack Russell Terrier is a small terrier that has its origins in fox hunting. It is principally white-bodied and smooth, rough or broken-coated but can be any colour.

Jack Russells are an energetic breed that rely on a high level of exercise and stimulation and are relatively free from serious health complaints. Originating from dogs bred and used by Reverend John Russell in the early 19th century, from whom the breed takes its name, the Jack Russell has similar origins to the modern Fox terrier. It has gone through several changes over the years, corresponding to different use and breed standards set by kennel clubs. Recognition by kennel clubs for the Jack Russell breed has been opposed by the breed's parent societies – which resulted in the breeding and recognition of the Parson Russell terrier. Jack Russells have appeared many times in film, television, and print – with several historical dogs of note. 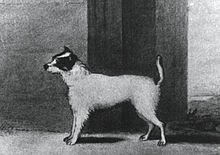 A drawing of Trump, the dog purchased by the Reverend John Russell.

The small white fox-working terriers we know today were first bred by the Reverend John Russell, a parson and hunting enthusiast born in 1795,[1] and they can trace their origin to the now extinct English white terrier.[2]Difficulty in differentiating the dog from the creature it was pursuing brought about the need for a mostly white dog,[3] and so in 1819 during his last year of university at Exeter College, Oxford,[4] he purchased a small white and tan terrier female named Trump from a local milkman in the nearby small hamlet of Elsfield[5] or Marston[6]). Trump epitomised his ideal Fox terrier,[7] which, at the time, was a term used for any terrier which was used to bolt foxes out of their burrows.[2] Her colouring was described as "...white, with just a patch of dark tan over each eye and ear; whilst a similar dot, not larger than a penny piece, marks the root of the tail."[8] Davies, a friend of Russell's, wrote: "Trump was such an animal as Russell had only seen in his dreams".[4] She was the basis for a breeding program to develop a terrier with high stamina for the hunt as well as the courage and formation to chase out foxes that had gone to ground.[9] By the 1850s, these dogs were recognised as a distinct breed.[10]

An important attribute in this dog was a tempered aggressiveness that would provide the necessary drive to pursue and bolt the fox, without resulting in physical harm to the quarry and effectively ending the chase, which was considered unsporting.[11] Russell was said to have prided himself that his terriers never tasted blood.[10] This line of terriers developed by John Russell was well respected for those qualities, and his dogs were often taken on by hunt enthusiasts. It is unlikely, however, that any dogs alive today can be proven to be descendants from Trump, as Russell was forced to sell all his dogs on more than one occasion because of financial difficulty, and had only four aged (and non-breeding) terriers left when he died in 1883.[12]

The Fox terrier and Jack Russell terrier type dogs of today are all descended from dogs of that period, although documented pedigrees earlier than 1862 have not been found, although several records remain of documented breeding by John Russell between the 1860s and 1880s. The Fox Terrier Club was formed in 1875 with Russell as one of the founder members; its breed standard was aspiration, and not a description of how the breed appeared then. By the start of the 20th century, the Fox terrier had altered more towards the modern breed, but in some parts of the country the old style of John Russell's terriers remained, and it is from those dogs that the modern Jack Russell type has descended.[4]

Many breeds can claim heritage to the early Fox terrier of this period, including the Brazilian terrier, Japanese terrier, Miniature Fox terrier, Ratonero Bodeguero Andaluz, Rat terrier, and Tenterfield terrier.[13]

Following Russell's death, the only people who made serious efforts to continue those strains were two men, one in Chislehurst with the surname of East, and another in Cornwall named Archer. East, at one point, had several couples, all of which were descended from one of Russell's dogs. The type aimed for were not as big as the show Fox terrier and were usually less than 15 pounds (6.8 kg).[3]

Arthur Blake Heinemann created the first breed standard and, in 1894, he founded the Devon and Somerset Badger Club, the aims of which were to promote badger digging rather than fox hunting, and the breeding of terriers suitable for this purpose. Terriers were acquired from Nicholas Snow of Oare, and they were likely descended from Russell's original dogs, as Russell would probably have hunted at some point with Snow's hunting club and is likely to have provided at least some of their original terriers.[4] By the turn of the 20th century, Russell's name had become associated with this breed of dog.[15]

The club was later renamed the Parson Jack Russell Terrier Club.[4] Badger digging required a different type of dog than fox hunting, and it is likely that Bull terrier stock was introduced to strengthen the breed, which may have caused the creation of a shorter legged variety of Jack Russell terrier that started to appear around this period. At the same time that a split was appearing between show and working Fox terriers, a further split was occurring between two different types of white terrier, both carrying Jack Russell's name.[3] Heinemann was invited to judge classes for working terriers at Crufts with an aim to bring working terriers back into the show ring and influence those that disregard working qualities in dogs. These classes were continued for several years by various judges, but Charles Cruft dropped the attempt as the classes were never heavily competed. Following Heinemann's death in 1930, the kennel and leadership of the club passed to Annie Harris, but the club itself folded shortly before World War II.[3][4] 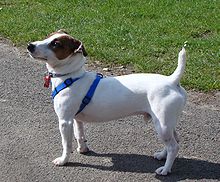 Following World War II, the requirement for hunting dogs drastically declined, and with it the numbers of Jack Russell terriers. The dogs were increasingly used as family and companion dogs. Further crossbreeding occurred, with Welsh corgis, Chihuahuas, and other smaller breeds of terrier. The offspring of these crosses became known as "Puddin' Dogs", "Shortie Jacks", or "Russell Terriers".[16]

The Jack Russell Terrier Club of America was formed in 1976 by Ailsa Crawford, one of the first Jack Russell terrier breeders in the United States. Size ranges for dogs were kept broad, with the ability of working dogs awarded higher than those in conformation shows. An open registry was maintained, with restricted line breeding. Registration for the club is made at adulthood for Jack Russells, rather than at birth, to ensure the breed's qualities remain, given the open registry.[17] 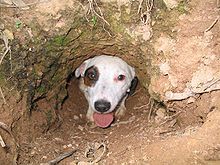 Several breed clubs appeared in the United Kingdom during the 1970s to promote the breed, including the Jack Russell Club of Great Britain (JRTCGB) and the South East Jack Russell Terrier Club (SEJRTC). The JRTCGB promoted the range of sizes that remain in its standards today, whereas the SEJRTC set a minimum height for dogs at 13 inches (33 cm). While the JRTCGB sought to ensure that the breed's working ability remained through non-recognition with other breed registries, the SEJRTC activity sought recognition with the UK Kennel Club.[18] In 1983, the Parson Jack Russell Club of Great Britain (PJRTCGB) was resurrected to seek Kennel Club recognition for the breed. Although the application was initially rejected, a new standard was created for the PJRTCGB based on the standard of the SEJRTC, and under that standard the breed was recognised by the Kennel Club in 1990 as the Parson Jack Russell terrier.[19] Jack was dropped from the official name in 1999, and the recognised name of the breed became the Parson Russell terrier.[20] 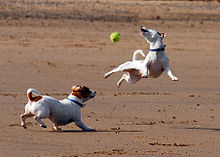