From Wikipedia, the free encyclopedia

The French Bulldog, also known as the Frenchie, is a small breed of domestic dog. Frenchies were the result in the 1800s of a cross between bulldog ancestors imported from England and local ratters in Paris(France).[3] 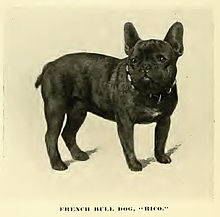 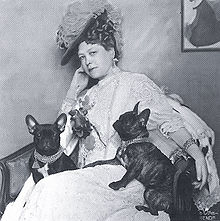 Anna-Maria Sacher with her French bulldogs in 1908

The origin of the modern French Bulldog breed descends directly from the dogs of the Molossians, an ancient Greek tribe. The dogs were spread throughout the ancient world by Phoenician traders. British Molossian dogs were developed into the Mastiff. A sub-family of the Mastiff were the Bullenbeisser, a type of dog used for bull-baiting.[7]

Blood sports such as bull-baiting were outlawed in England in 1835, leaving these "Bulldogs" unemployed.[7] However, they had been bred for non-sporting reasons since at least 1800, and so their use changed from a sporting breed to a companion breed. To reduce their size, some Bulldogs were crossed with terriers, while others were crossed with pugs. By 1850 the Toy Bulldog had become common in England, and appeared in conformation shows when they began around 1860.[citation needed] These dogs weighed around 16–25 pounds (7.3–11.3 kg), although classes were also available at dog shows for those that weighed under 12 pounds (5.4 kg).[7]

At the same time, lace workers from Nottingham, displaced by the Industrial Revolution, began to settle in Normandy, France.[8] They brought a variety of dogs with them, including Miniature Bulldogs.[9] The dogs became popular in France and a trade in imported small Bulldogs was created, with breeders in England sending over Bulldogs that they considered to be too small, or with faults such as ears that stood up. By 1860, there were few Miniature Bulldogs left in England, such was their popularity in France and due to the exploits of specialist dog exporters.[10]

The small Bulldog type gradually became thought of as a breed, and received a name, the Bouledogue Francais.[10] This Francization of the English name is also a contraction of the words "boule" (ball) and "dogue"(mastiff or molosser). The dogs were highly fashionable and were sought after by society ladies and Parisian prostitutes alike, as well as creatives such as artists, writers, and fashion designers.[10] However, records were not kept of the breed's development as it diverged further away from its original Bulldog roots. As it changed, terrier and Pug stock may have been brought in to develop traits such as the breed's long straight ears, and the roundness of their eyes.[10]

Bulldogs were very popular in the past, especially in Western Europe. One of its ancestors was the English bulldog. Americans had been importing French Bulldogs for a while, but it was not until 1885 when they were brought over in order to set up an American-based breeding program. They were mostly owned by society ladies, who first displayed them at the Westminster Kennel Club Dog Show in 1896. They arrived again in the following year with even more entries, where the judging of the breed would go on to have future ramifications. The judge in question at the dog show, a Mr. Sven Feltstein, only chose winners with "rose ears" – ears that folded at the tip, as with the standard for English Bulldogs. The ladies formed the French Bull Dog Club of America and created the breed standard which stated for the first time that the "erect bat ear" was the correct type.[11]

In the early 20th century the breed remained in vogue for high society, with dogs changing hands for up to $3,000 and being owned by members of influential families such as the Rockefellers and the J. P. Morgans. The American Kennel Club recognised the breed quickly after the breed club was formed, and by 1906 the French Bulldog was the fifth most popular dog breed in America.[12] In 2013, the American Kennel Club (AKC) ranked the French Bulldog as the 11th most popular breed in the United States, enjoying a sharp rise in popularity from 54th place a decade before, in 2003.[13] By 2014, they had moved up to become the ninth most popular AKC registered dog breed in the USA.[5]

This new Bulldog breed arrived for the first time in England in 1893, with English Bulldog breeds in uproar as the French imports did not meet the new breed standards in place by this time and wanted to prevent the English stock from cross-breeding with the French. The Kennel Club initially recognised them as a subset of the existing English Bulldog breed rather than an entirely new breed.[10] Some English breeders in this period bred the French Bulldogs in order to resurrect the Toy Bulldog breed.[8] On 10 July 1902, at the house of Frederick W. Cousens, a meeting was held to set up a breed club in order to seek individual recognition for the French breed.[11] The adopted breed standard was the same one which was already in use in America, France, Germany and Austria.[8] Despite opposition from Miniature Bulldog (the new breed name for the Toy Bulldog) and Bulldog breeders,[14] in 1905, the Kennel Club changed its policy on the breed and recognised them separate from the English variety, initially as the Bouledogue Francais, then later in 1912 the name changed to French Bulldog.[11] 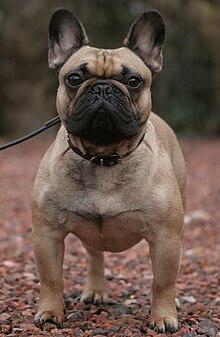 The New Complete Dog Book: Official Breed Standards and All-New Profiles for 200 Breeds, 21st Edition,[15] is an official publication of the American Kennel Club and sets forth the Official Breed Standard for all breeds recognized by the AKC, including the French Bulldog. The French Bulldog should have the appearance of an active, muscular dog, of heavy bone, smooth coat, compactly built, and of medium or small structure. The points should be well distributed and bear good relation one to the other, no feature being in such prominence from either excess or lack of quality that the animal appears deformed or poorly proportioned. In comparison to specimens of different gender, due allowance should be made in favor of the female dogs, which do not bear the characteristics of the breed to the same marked degree as do the male dogs.

Acceptable colors under the breed standard are the various shades of brindle, fawn, tan or white with brindle patches (known as "pied"). The most common colors are brindle, then fawn, with pieds being less common than the other colors. The breed clubs do not recognize any other colors or patterns. This is because some colors come linked with genetic health problems not usually found in the breed, most notably blue coloration, which is linked with a form of alopecia (hair loss or baldness), sometimes known as "Blue Dog Alopecia".[16] Although this is heavily disputed by some organizations,[17] there does appear to be an indication that the health, hair and/or skin conditions are caused by the color pigment (melanin) clumping in the hairshaft itself.[18] Even dogs that are not blue can suffer from "blue dog alopecia" or canine follicular dysplasia. The American Kennel Clubstates that Frenchies can be brindle, fawn, white, and brindle and white.[9] The skin should be soft and loose, especially at the head and shoulders, forming wrinkles. Coat moderately fine, brilliant, short and smooth.

The head should be large and square. The top of the skull should be flat but slightly rounded. The stop should be well-defined, causing a hollow or groove between the eyes. The muzzle should be broad, deep, and well laid back; the muscles of the cheeks well developed. The nose should be extremely short; nostrils broad with well defined line between them. The nose and flews should be black, except in the case of lighter-colored dogs, where a lighter color of nose is acceptable. The flews should be thick and broad, hanging over the lower jaw at the sides, meeting the underlip in front and covering the teeth, which should not be seen when the mouth is closed. The under-jaw should be deep, square, broad, undershot, and well turned up. Eyes should be wide apart, set low down in the skull, as far from the ears as possible, round in form, of moderate size, neither sunken nor bulging, and in color dark. No haw and no white of the eye showing when looking forward. Ears shall hereafter be known as the bat ear, broad at the base, elongated, with round top, set high in the head, but not too close together, and carried erect with the orifice to the front. The leather of the ear fine and soft.

The neck should be thick and well arched with loose skin at the throat. The forelegs should be short, stout, straight and muscular, set wide apart. The body should be short and well-rounded. The back should be a roach back, with a slight fall close behind the shoulders. It should be strong and short, broad at the shoulders and narrowing at the loins. The chest, broad, deep and full, well ribbed with the belly tucked up.

The hind legs should be strong and muscular, longer than the forelegs, so as to elevate the loins above the shoulders. Hocks well let down. The feet should be moderate in size, compact and firmly set. Toes compact, well split up, with high knuckles and short stubby nails; hind feet slightly longer than forefeet. The tail should be either straight or screwed (but not curly), short, hung V low, thick root and fine tip; carried low in repose. Other than bat ears; black and white, black and tan, liver, mouse or solid black (black means without any trace of brindle) ; eyes of different color; nose other than black except in the case of the lighter-colored dogs, where a lighter color of nose is acceptable; hare lip; any mutilation.