From Wikipedia, the free encyclopedia
For other uses, see Barbet.

The barbet is a breed of dog; it is a medium-sized French water dog. It is listed in Group 8 (retrievers, flushing dogs, water dogs) by the Société Centrale Canine, the French Kennel Club.

The breed name "barbet" comes from the French word barbe, which means beard.

The barbet is a rare breed. Most barbets, especially those shown in conformation shows, are entirely black, black and white, or brown. It is common to see white chest spots and white paws or legs on black or brown coated dogs. Parti, creme, and pied variations are being born but in very limited numbers. 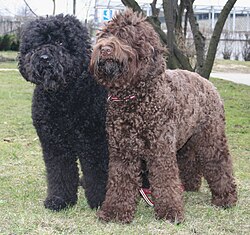 Their coats grow long and must be groomed regularly, otherwise the coat can become matted and the barbet may lose small tufts of hair like tumbleweeds.

The accepted colours of the breed are solid black, brown, fawn, grey, pale fawn, white, or more or less pied. All shades of red-fawn and pale fawn are permitted. The shade should, preferably, be the same as the colour of the body. Grey and white are extremely rare; mixed colours (except with white) are considered a fault. The most common colors are black or brown with white markings. The birth figures worldwide for 2007 are 176. All born were black or brown some with white markings on the chest, chin, and legs. 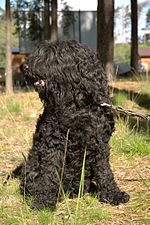 The barbet’s personality is described as friendly, joyful, obedient, and intelligent. They are quick to learn and need lifelong obedience training. They are a great with children, families, and the elderly. Barbets will bond with their family and prefer to be in the same room with the family at all times. They need exercise daily to keep the dog in a healthy state of mind and body.

They are capable retrievers for waterfowl hunting. In France, the barbet can take the Test d'Aptitudes Naturelles (T.A.N.), a basic water retrieving test, and has recently been permitted to participate in the BCE (Brevet de Chasse a l'Eau), a general hunting test involving field and water trials. In Germany, the barbet takes part in field trials.

Barbets are vulnerable to certain genetic defects. Due to the limited gene pool for this breed, conscientious breeders carefully study pedigrees and select dogs to minimize the chance of genetic diseases. Unfortunately, like many breeds, a growing popularity has encouraged breeding by people who are not knowledgeable about the breed. Of the few health issues that have exhibited themselves; epilepsy, hernias, hip dysplasia and entropion, most problems can be traced back 4–6 generations. Often this was due to limited breeding stock as well as the fact that many matings were with dogs of unknown medical history. 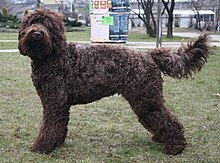 Due to the extremely low number of barbets in the world, little is known about long term health issues. Some issues that have exhibited themselves are ear infections, hip dysplasia, hernias, undescended testicles, undershot/overshot bites, and epilepsy. However, a study has just begun in France about health issues in the barbet as several breeds have recently "contributed" to the Barbet. Most breeders today hipscore the parents before any matings and A, B, and C hipscores can be used.

The most common of these issues are ear infections, a problem in most water dog varieties. Ear problems can be minimized by proper ear care. A veterinarian should be consulted if the dog shows signs of an ear infection. The ear should always be clear of any hair, and inspected very regularly.

Like poodles, barbets are vulnerable to hip dysplasia. However, the risk of a barbet developing hip dysplasia can be greatly reduced by thoroughly checking the pedigrees and health clearances in both the sire and dam of the dog.

Lifespan of the barbet averages 13–15 years with one recorded living until 19 years of age.[citation needed]

The breed is an integral part of dog history, and many familiar breeds have Barbet in their ancestry. Depending on geography and necessity, the barbet connected through the centuries in various capacities, and as a companion dog, but more as an all-around working dog. The name barbet became throughout centuries a "generic" name for a dog with a long, curly, woolly coat.[1]

The 'Grand Barbet' depicted in Count George Louis Buffon's book Histoire Naturelle (1750) is thought to be the original source of the various water dog breeds (poodle, Portuguese Water Dog, American Water Spaniel, and so on). Its actual origin is lost in antiquity but probably[opinion] stems from corded herding stock (see Komondor).[citation needed]

The barbet has also worked as sailor's assistants, much like the Portuguese water dog. It was best known for being a waterfowl retriever in the marshes, wetlands, and estuaries of France.[2] This is where the expression "muddy as a barbet" came from in the 19th century. Between the late 18th to early 19th centuries, the same dog was known as the barbet in France, the barbone in Italy, and the pudel in Germany; for almost a hundred years the barbet and poodle were considered one and the same.[3]

With the advent of dog shows and selective breeding based purely on aesthetics, the poodle was developed to be more elegant and of a solid colour to distinguish it from its more common past. The versatile nature of the Barbet has meant its survival, and many of today's Barbet still have the assets attributed to them from the past. The Barbet origins and bloodlines can be traced back to the writing of the first standard in 1891.[citation needed]

The breed is gaining popularity in Scandinavian countries and North America as more and more people are becoming interested in this all-around working dog, often simply as a pet.[citation needed]

Status in the United States

There are very few barbets in the United States. Estimated barbet numbers living in America as of 2013 are somewhere between 150 and 200. Steps are being taken to slowly and responsibly increase the barbet population in the States, through careful breeding and imports from Canada and Europe.

Additionally, there needs to be an active Barbet Club promoting the breed through meet the breeds, fun matches, rally, obedience, hunting, and showing active membership as well as interest in the breed. It is crucial every barbet imported or born in America be registered with the AKC FSS for the breed to survive in America. In 2009, there was one litter of six. In 2011 there were two barbet litters: five brown puppies born in April, and 11 puppies (five brown, six black) born on Thanksgiving. In 2012 there were two litters born in America. In 2013 there were three litters born in the States. 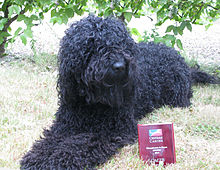 In modern times, the first barbet, a male, was brought into the UK in 2001 although he did not reproduce. In 2007 two unrelated females were brought in from France, having completed their period of quarantine and the majority of barbets currently in the UK are descendants of these. Since then, further examples of the breed have been imported from France, Holland, Canada, Poland and Sweden. Several UK-born barbets have been used in the breeding programmes of other countries and their offspring can be found in Holland, Switzerland, Germany, Sweden, Finland and Canada.

From April 2018 the barbet will be the 220th breed recognized by The Kennel Club, barbets born in the UK prior to this date have been registered in France (the country of origin) by the Société Centrale Canine which is a full F.C.I. member. There are on average only one or two litters born per year in the UK. As of 2018 there are approximately 140 barbets living in the UK.

The majority of barbets in the UK are kept as pets, although a small number are used regularly as gun dogs, agility dogs and for search and rescue work; they can also take part in 'Conformation Shows' in F.C.I. member countries with two achieving French Champion status in 2014.